Raiders of the Lost Artifacts: Spy

In the years leading up to WW2 espionage activity escalated. The Spy class specializes in infiltration, information gathering, and even assassination. It would be interesting for a character to work as an agent keeping track of the other players and any interesting artifacts or locations they find. "Legit" spy-work would be very appropriate with the Military or Government background although any background would work with the right backstory.

Another possibility for this class is of a criminal or reformed criminal such as thieves or cat burglars or even bounty hunters. In this case I would also allow a new background, Crime. It works as Law does but in dealing with criminals and the underworld. 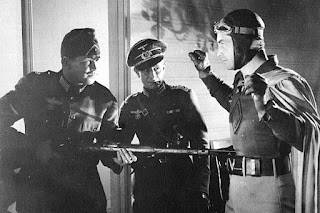 Spy
XP, HD, BHB, and Luck as Treasure Hunter.
Spies can use any weapon or armor.

Backstab
If a Spy can get behind an enemy without being detected he can attack the unaware target receiving a +4 to hit bonus and doing double damage. This attack applies to melee and unarmed attacks only. The target must also have a back and vulnerable points to attack, for example a blob monster would not be able to be backstabbed. 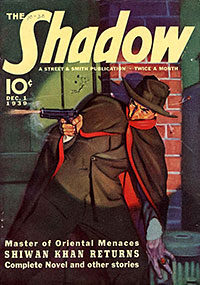 Hear Noise
A useful ability allowing the Spy to detect noise or eavesdrop conversation in crowded rooms or behind locked doors and walls. Attempts to use this ability takes a  full round and no other actions can be performed as the Spy focus on listening.

The Referee should set a difficulty number for this roll based on the optional Skill rules in Appendix Four. Roll d20, add Level and Wisdom Bonus to the roll.

Hide
As a Treasure Hunter. An essential skill for infiltrating and observation.

Languages
As a Treasure Hunter. The Spy often needs to learn multiple languages to apply his craft.

Open Locks
As a Treasure Hunter. Another essential skill in infiltration and information gathering.

Stealth
As a Treasure Hunter. Spies sneak around and can use this ability to deliver a Backstab.

Optional Skills
If the optional skills system is used the Spy is treated as a Treasure Hunter. 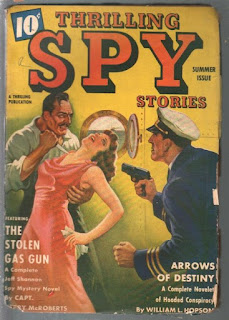 Posted by David Baymiller at 4:07 PM