I had written this a few years ago for a Savage Worlds WWII game. My games tend towards Pulp and Horror instead of total historical 'accuracy.' I had restatted it for my own OSR period game stuff a while back and after enjoying Pete Spahn's really fun WWII: Operation White Box game I decided to stat it up for that.

Along with this, for WWII:OWB,  I'll be redoing my Pulp Horror adventure The Island Fiend,  a new mini-adventure called The Battle of Felcamp (Nazi super-science), a reworking of another Savage WWII Pulp adventure I wrote called Valley of the Shrine, and throwing out some notes for using the Isle of Dread as a WWII lost world/Dinosaur Island game. Most of the Savage stuff is done and needs restatting for WWII:OWB and some clean up.

I'll probably  also throw together WWII Averoigne setting notes and a few stats for DC WWII such as Sgt Rock, GI Robot, the Warwheel, etc at some point.
Stay tuned.

The Player Characters
The characters are a squad sent by military intelligence to investigate why the Nazi’s have taken such an active interest in the French village of Tanière de Loup. Traveling from an air base in England, the squad completed a successful night parachute drop within five miles of the village. After stowing their parachutes, checking their weapons, and double-timing the five miles down the trail, they are crouched in the forest on a large hill overlooking the valley and Tanière de Loup.

From their position they can clearly see the town in the faint moonlight. Very few lights are shining in the village, most prominent are the village church and a tavern named Ils Loup Gris (The Grey Wolf.) The sound of loud German singing and carousing wafts from the tavern. To the north of the village bright lights are showing near some ruins in the forest.

The squad has been given the name of Father Gilbert Milane as a Resistance contact based in the church. He is the contact who alerted the allies to the unusual interest in the village. All contact was lost with Father Milane after his initial report.

The clock in the town square tolls midnight…

1. Undead Experiments
The Nazi's have developed a small amount of an experimental serum in an attempt to create powerful ubersoldiers. The original base for the serum was a small vial of vampire blood found in the private collection of an occult collector in Poland. The sample was very weak however and has been diluted to make enough serum for several test subjects. The finished serum is a very a dangerous drug, fatal to the majority of the test subjects. To further refine the serum they must have a better base for the drug, something more than weak watered down blood. They must obtain the remains of a true vampire.

To his end, a manuscript has been discovered by Heereswaffenamt Okkulte researchers teams during the occupation of France. The document dates back to the late 1700’s, being written in the small village of Tanière de Loup by the village priest. When it was translated the manuscript contained the story of a fiendish man named Henri Pelier who returned from his grave to drink the blood of the living. The villagers of Tanière de Loup disinterred Pelier’s corpse and drove a stake through it. This manuscript was signed not only by the priest, but by a passing officer in the French Army and several prominent members of the village lending legitimacy to the entire story. The manuscript is also very clear as to the location of the graveyard containing the vampire's unmarked grave.

To secure the remains, the Nazi’s have sent an team composed of five occult archaeologists and a small squad of SS troopers. Leading the expedition is SS Sturmbannführer Hoffrichter, the only survivor of the original ten serum test subjects.

2. Tanière de Loup
Tanière de Loup is a tiny village nestled in a small forested valley in occupied France. The village is several hundred years old and lies next to a fast-flowing clear stream. It includes a church with a graveyard, a clock tower, a mill, and a small tavern.

Hidden less than a half mile north of the village is the forested-overgrown remains of the original graveyard and ruined church. Shunned by the villagers, they were abandoned nearly two hundred years ago after the vampire residing in the cemetery was destroyed. A new church and graveyard were constructed and consecrated closer to the village.

The Nazi team has been here for two weeks, slowly digging up and sifting through the old graves. During this time, Sturmbannführer Hoffrichter and the SS Troopers have terrorized the town with their brutality, taking the best food, drink, and house for themselves. In addition, the Sturmbannführer has killed a number of villagers by draining their blood, causing a panic. Many believe the Devil walks among them.'

Sturmbannführer Hoffrichter has taken over the Mayor's modest home for himself and the SS is using it as headquarters. It contains their weapons (under guard), papers, maps, radio, etc. Their armory consists of one MG42 medium machine gun, one MP40 submachinegun per soldier plus two spares, a small crate of twelve grenades, and plenty of ammo for all.

Father Gilbert Milane secretly contacted the French Resistance by messenger when the Nazi’s came to the village two weeks ago. He has not been able to make contact again to tell of Major Hoffrichter‘s atrocities.  Although he is a brave man he is no fighter. Familiar with the legends in the town, and having access to the original church records hidden in his church, he knows of the vampire legend. He and the surviving villagers believe the Sturmbannführer to be an actual vampire. If the squad seeks him out, he will inform them of the legend and of his suspicions and arm them with crosses and holy water if they will let him.

3. Into the Valley of Death
Of the more than one hundred original villagers only sixty-three terrorized survivors remain. The others have fled the village or have been drained of blood and disposed of by Sturmbannführer Hoffrichter. All are under curfew and must be home by sundown.

Father Milane is locked within the church fervently praying for the release of his village from the Devil’s minions.

The majority of the SS Troopers are relaxing in the Grey Wolf after guarding the village in the daytime and relieved to be away from the Sturmbannführer. He is obviously becoming inhuman in form and mind and he frightens them.

In the northern forested area of the small valley, the glare of electric lights in the dark is easily visible from the overgrown graveyard. The archaeologists and Major Hoffrichter are hard at work sifting through the dead.

4. Open Graves
In their search for the vampire’s burial site, they have unearthed a number of old graves and carefully examined the decomposed contents.. The open graves and the broken and crumbling headstones provide cover as well as potential hazards, or even weapons, in a fight.

When he realizes that the dig is under attack Sturmbannführer Hoffrichter will fly into a rage and attempt to destroy those who would dare impede his mission. He is a vicious melee fighter, using his teeth and claws. Once discovered he will hunt the squad throughout the graveyard, forest, and village to destroy them. There is no quarter given or asked.

In the end, the grave of the vampire will not be found. In truth, the body was dug up and consumed by dogs after it was staked all those years ago.

SS Sturmbannführer (Major) Benedikt Johann Hoffrichter, 32
Pseudo-Vampire
Arrogant, cruel, and ruthless, he is the epitome of the authoritarian SS Officer. He is also slowly growing insane due to his condition. He is a burly man of average height with sandy brown hair cut into the popular undercut stye of the German military. His skin has a dead pallor and his brown eyes catch the light like a cat's. His nose has begun to push into his face vaguely resembling a bat and his teeth are fanged.  His fingers are tipped with claws.
Armor Class: 4/15
Hit Dice: 5
Hit Points: 30
Total Hit Bonus: +5
Attacks: 2 claws or bite.
Save: 15
Special: See below.
Movement: 12
HDE/XP: 8/800

Hoffrichter has amazing reflexes giving him two attacks per round (and his good AC.) He can attack with any combination of claws and his fangs. Each attack does 1d6 damage.

As a pseudo-vampire he can see in the dark out to 90' and is highly resistant to damage healing 5 hp per round. He will heal even if below zero hit points. The only way to stop this is to drive a wooden stake through his heart. He will not regenerate as long as the stake remains in place. He can be killed this way by removing his head or burning the body to ash and bone.

He can move about in sunlight but it is painful and distracting even with tinted goggles. He suffers a two penaty to all rolls while the sun is over the horizon.

The Sturmbannführer requires 2 pints of blood each evening to sate his growing bloodlust. He has been feeding in villagers and still his thirst grows. He has yet to feed this evening and at the first sight of blood (any blood friend or foe) he must make a Saving Throw with a four penalty or fly into a blood frenzy attacking the source and biting the victim until they are dead. Once his blood lust has been sated he will return his normal calculating self.

In addition it his claws and fangs the Sturmbannführer also carries a Walther PPK (medium handgun), and an SS dagger.

SS Troopers (4 PER HERO)
Brutal and loyal members of the Reich, although the Sturmbannführer frightens even these battle hardened soldiers. Use the base SS Soldier statistics. Those at the tavern are armed only with knives, those on guard duty are armed with their submachinegun and a knife. Two guards are on duty at the armory at all times and two walk the streets looking for anyone out past curfew or other mischief.

Nazi Archaeologists (5)
Fearful of the Sturmbannführer, they are eager to please him and the Fuhrer with a successful mission. Use the base Civilian statistics. In the graveyard they are unarmed except for shovels, tools, etc (treat as clubs.) 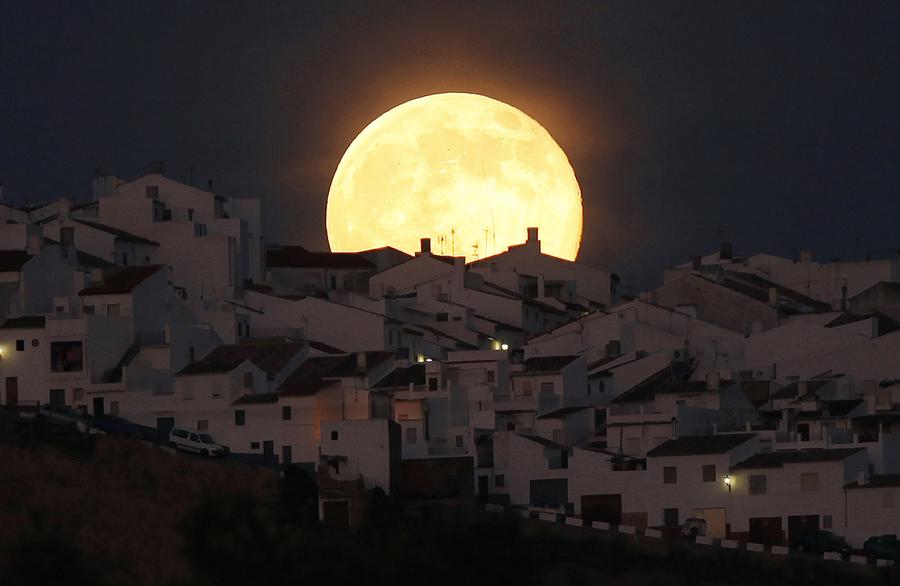 Reuters/Jon Nazca
Posted by David Baymiller at 3:02 AM 2 comments:

Created by a flamboyant insane elderly mage of chaos in his dying days. They ate the poor mad bastard and escaped into the wild where they hide among the normal animals and feast on unwary creatures.

The look like normal flamingos until they attack. Their eyes glow with a mad bloodlust and needle sharp teeth unfold from their beaks. With a screeching rush of pink wings they attack, killing and mauling their prey before devouring them, stripping the fresh meat from the dripping bones!

Murder Flamingos work best in hunting flocks. For every two Flamingos attacking a single target the Flamingos gain a +1 bonus to attacks with a max bonus of +4.

When attacking a Flamingo flaps its wings in the face of its intended meal. The target must make a Saving Throw or receive a  -2 to all attacks against the Flamingo.

One leg stand?
Perhaps it's nothing but conserving heat in cold water. Perhaps it's something more sinister. Leaving this up to individual GM's. Muhahahahaha. 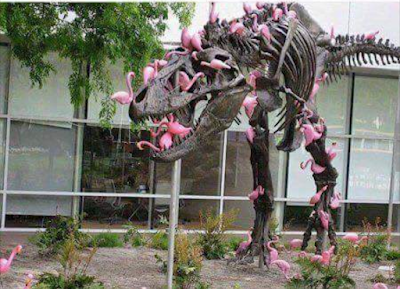 Posted by David Baymiller at 11:16 PM No comments: