Thing from Another World (Death in Many Forms for OSR)

Had this sitting around for a while. Decided to finish it. Hopefully it is coherent. It's been one of those days. :D
This thing is based off the 1982 John Carpenter film and it's prequel.
It is lethal. PCs should be very well prepared for this. 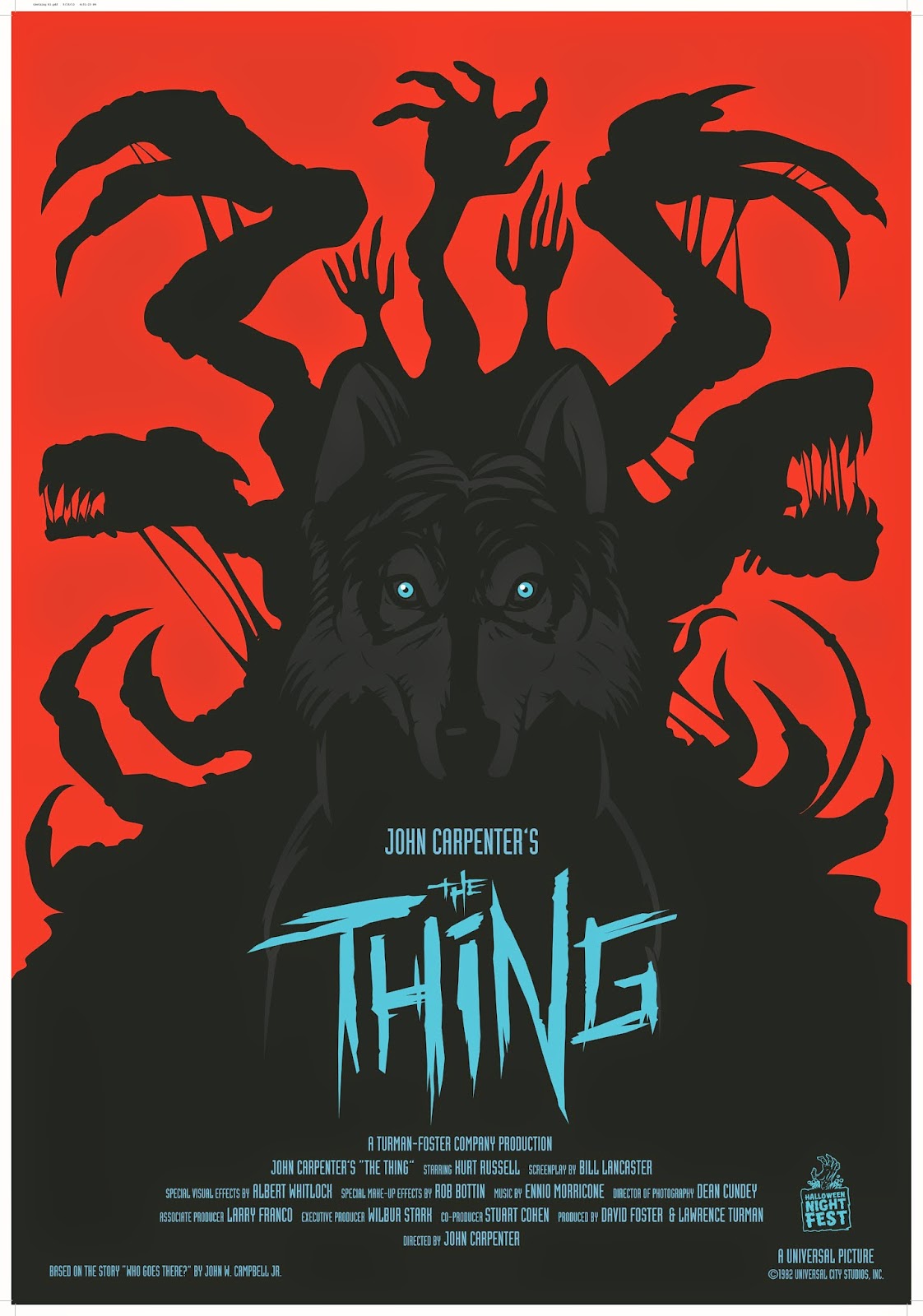 Thing from Another World
An extraterrestrial parasitic life form capable of assimilating organic organisms. It will perfectly mimic the dominate organic organism and then quietly attempt to assimilate the entire species.
They are an extinction level event waiting to happen. They must be destroyed when found.
AC: 12  (see Size below)
HD: 8 HD base used as a whole or split among it's body parts (see Split ability below)
HP: 48 base used as a whole or 8 per body part HD (see Split ability below)
ATTACKS: (see Size below)
SAVE: by hit dice split
SPECIAL: Absorb, Mimic, Split, Merge, Combat Abilities, Regeneration, Hibernation
MOVE: (see Combat: Movement below)
EXP: Variable

Assimilate
A Thing can perfectly mimic any organic organism. To do so it must assimilate the victim by pressing its flesh directly against the flesh of the victim. The invading flesh must be soft; teeth, hard projectiles, claws, etc cannot initiate the process. A Thing an do this by pressing itself against the target or wrapping tentacles around the target to envelope as much of the victim's flesh as possible. Larger than man-size Things might do this by brute force while a smaller one will most likely use stealth to join its flesh to its target.

Edit, Clarification: When assimilating the Thing has two options: it can absorb the victim and take his place or allow it to stay a separate entity; a new Thing.

A Thing must make an attack roll to hit flesh. If the target is naked, without shirt, etc it is a normal to hit roll. If their flesh is sufficiently covered the face is the almost always preferred target and they must make a called shot with a -6 penalty to hit. If the Thing surprises its victim it gains a +4 to its attack roll, dropping the penalty to -6 for the called shot. Once a Thing has made contact its flesh bonds with the victim's and it must be ripped or burned away causing 2d6 damage to the victim. To rip away the victim must make a Str roll with a -6 penalty. If others help rip the victim away the penalty drops by 2 for each person helping (maximum three helping.) 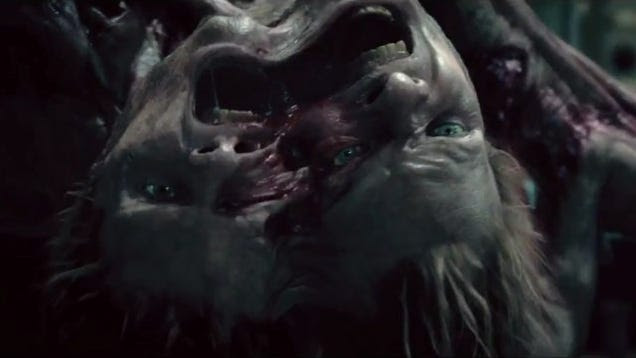 If a victim is forcefully separated from a Thing he must make a Saving Throw (Poison). If successful he has fought off the invading organism. If failed he will fall into a coma in 1d6 minutes as the assimilate continues from inside. He will be lost as the Thing continues to assimilate and replicate his flesh from the inside out. It will awaken after 1d6x5 minutes and attempt to pass itself of as the victim. Let the player play as normal, don't let him know what has happened. When the Thing emerges it will be as big a shock to them as anyone else.

If the freed victim is somehow flash frozen it may help stop the assimilate process until some sort of healing or medical process can be used to save him.

Each round the victim stays attached to a Thing the victim must make a Saving Throw (Poison) with a cumulative -2 penalty after the first round. Once the Save is failed the  victim is paralyzed as the Thing's flesh penetrates into the victim's circulatory and nervous systems . Within 1d6x5 minutes the internal assimilation and mimicry are  complete.

The target of assimilation must either be alive or freshly dead: a Thing will not assimilate decaying flesh. It cannot assimilate inorganic material: fillings, prosthesis, surgery pins, etc will be ejected from the mass.

A Thing will generally try to assimilate a victim quietly and in private. It does not want to be interrupted;it prefers stealth tactics to outright violence and it can't replace someone and infiltrate a group if the group knows a person was attacked. If interrupted during this assimilation time it will try to flee. It will have obvious flaws in it's physical form and can be easily identified.

Blatant assimilation is almost always a last ditch defense to save itself when it has no other choice. If it's hand is forced a Thing can merge with other Things (see Merge below) and outright try to destroy its enemies.

Mimicry
Once it has absorbed and replicated and organism a Thing can perfectly mimic that creature.
It activates with full 10HD and abilities. It also gains the replicated creatures natural weapons, movement, special abilities, spells, etc at the level of the creature absorbed. It is indistinguishable from the original creature to all but the most specific tests. It has all of it's memories, mannerisms, habits, etc. Even defects such as a weak heart, weak eyes, scars, etc are replicated.
It must acquire clothing and other equipment to complete its masquerade.

Split
A Thing is a collective organism. Each of its cells can split apart as a separate entity working for the survival of the whole creature. This gives it the ability to split itself off into smaller creatures. This ability is used to save as much of the creature as possible as parts of the collective body become damaged beyond use (such as by fire) or to separate into smaller Things to stealthily hunt down and absorb a victim.


It's ability to split also gives it the ability to grow arms, legs, claws, tentacles, extra heads, eyes, whatever from it's separated body parts. It can split it's flesh to reveal vicious teeth. The combinations are only limited by what a Thing has absorbed in the past. (See Combat: Attacks and Damage below.) The sudden reveal can be a shock to see as the flesh splits and a vicious drooling maw comes a your face. If the Thing is under suspicion it still gets a surprise roll of 1 on a 1d6 to surprise by suddenly splitting open. If it is not under suspicion the chance for surprise goes up to 1-3 on a 1d6.

A Thing mimicking a human has 8 HD, divided into sections for convenience to track abilities, hit points, attack bonuses, saves, etc of smaller forms. When a Thing splits add together the Hit Dice of the new split forms.  For example if a head splits off it's a 1 HD creature. The rest of the creature is now 7HD. If the upper torso  separates from the pelvis and legs we now have three Things with the following HD: Head Thing - 1HD, Arms and Upper Torso Thing - 4HD, Pelvis and Legs Thing - 3HD.
Each is now a separate entity, an independent Thing seeking to attack and assimilate it's enemies.

A Thing has maximum hit points per level. It has control over its cellular structure and is built to survive. Unless a called shot is made to an extremity, damage is taken by the torso. Once it is destroyed or in serious threat of permanent damage the Thing will kick into survival mode and it will split its body into smaller Things with 8hp per HD.

Any damage done to specific parts (such as legs on fire) those parts take the damage and it does not affect the other parts. If full body damage is done each part takes the entire damage rolled to its individual hps.

A Thing's intelligence seems to drop with it's smaller sizes. Smaller Things seem to rely more on instinct than on reasoning while larger Things, carrying the experiences of those it has assimilated can be frighteningly intelligent, using technology, even building escape vehicles.

Merge
If threatened with destruction multiple Things can join to increase their mass and fighting ability.
For each man-sized thing merged the base Thing (highest HD) gains 2 HD. The max HD for this is 16 HD. This increases, attacks, damage, and armor class (see combat below.) 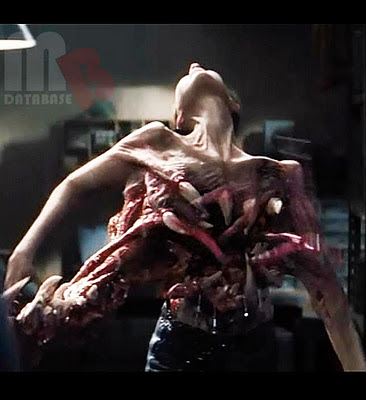 Special Attacks
If the DM wishes a Thing can have ranged and other attacks based on what it has assimilated.
One of the easiest ways to do this is simply steal special abilities from other monster stats. I would be careful with this though, only one or two, or it will be overwhelming.
Acid Spray (2d6 per round for 3 rounds). Range of 30'.
Web. As per the spell.
Melee attack at 10' extended range.
If two tentacles hit, draw the victim to the mouth for automatic damage each round until a Saving Throw (Death) at -4 is made.

Movement
While mimicking a creature a Thing uses that creature's natural movement rates until it reveals itself as a Thing.
If necessary it can take a full round action and grow wings, legs, or other ways of moving around quickly. Everything from extra human appendages to insect legs and tentacles based on what it has assimilated in the past.
At twice man-size or larger (16HD): movement drops back to 120(40) as the bulk begins to slow it down.
At larger than man-size: 150(50) it can move faster than a man thanks to multiple legs/appendages and extra muscle.
At man-size and smaller 120(40): even if split apart onto smaller Things the extra legs/appendages allow it to scuttle quickly along.

It is quite likely a Thing has assimilated a creature that can use the spider climb ability, adding to its effectiveness.

Surprise
Smaller Things are master of cover and surprise. If they can get under shelves, tables, chairs, or other cover or down dark hallways with plenty of hidey holes they have a 1-4 on a 1d6 chance of hiding from pursuers. They can sneak along at the same chance. IF they successfully sneak up on a victim they have a chance to surprise them gaining a bonus to their hit; this is especially important when attempting a called shot during an assimilation attempt (see Assimilation above.)

Regeneration
A Thing can regenerate any damage except fire or electricity at 3 hp per round.
Fire and electricity, if applied will cause it to make a Saving Throw (Death). If failed it does not reveal it's nature. If failed it immediately attacks and then attempts to flee once it has cleared a path.

Hibernation
Freezing and below temperatures put a Thing into hibernation.
Use current hit points as a 'hibernation track'. This is how much cold it can take. For each hour in the freezing condition it loses 2d6 from the hp 'track.' When at 0 the creature goes into hibernation. When it is thawed it wakes up in the same condition it was before freezing after 2d6 hours.

Posted by David Baymiller at 7:05 PM