OSR Vehicle Rules (My take on them)

I already posted very basic ones here.
I wanted more in depth rules, but not overwhelming.

DRIVING CHECKS
The Drive Check is simply a normal Dex roll modified by road conditions, damage, and perhaps even a Class Ability.(Driver Class) All penalties and bonuses are cumulative.

Skid
The Vehicle travels in the direction it was heading for a distance of feet equal to 1/2 of the speed it was travelling in mph. The Driver must make a Drive Check at the end of the skid (-2 penalty) or the vehicle comes to an abrupt halt. If the vehicle is travelleling more than 30 mph there is a chance that the Vehicle rolls over if the Check is missed by 11+.
If the Vehicle hits an object both take damage as per normal collision rules. Passengers take half of all damage. (See Vehicle and Passenger Damage below.)

Spin
The Vehicle spins wildly for the roud and ends up facing a random (1d8) direction. If the Driver makes a successful Drive Check (-8 penalty) the Vehicle can continue at normal speed if. If failed it skids to a stop after a distance in feet equal to 1/2 of the speed it was travelling in mph, now facing the new direction. If the vehicle is travelleling more than 30 mph there is a chance that the Vehicle rolls over if the Check is missed by 11+.
If the Vehicle hits an object both take damage as per normal collision rules. Passengers take half of all damage. (See Vehicle and Passenger Damage below.)

Roll
The Vehicle roll in a straight line for a number of feet equal to it's current speed in mph x 1d6.
Damage is equal to normal mph damage plus an extra 2d6 for rolling. If the rolling If he Vehicle hits an object both take damage as per normal collision rules. Passengers take half of all damage, including the extra rolling damage. (See xxxx below,)
50 percent chance of landing wheels on ground.

COMBAT BASICS
Initiative
Standard initiative rolls. The vehicle moves on the driver's initiative.
If the vehicle has a crew (such as gunners) they act on their own initiative, if group initiative is not used..

The driver can push the max speed and gain more speed at the cost of control and stress to the vehicle. The max speed can be pushed for an additional 20 mph. Drive Checks at this speed are at a -6 penalty. Every 5 rounds of pushing it requires the Driver to roll a 1d6. On a 1 or 2 the motor is damaged and the Driver must roll a Drive Check at -6 or wreck it. Until fixed the car is at half max speed.

Combat Speed vs Character Movement
Keeping it quick and easy: movement in feet equals 10' per every mph travelling. (ex: 25 mph euals 250 feet per round.)

Vehicle Armor Class
Each Driver adds his Dex bonus to the vehicle's AC. For every 20mph of movement add a +1 to vehicle AC IF the vehicle is travelling across the attacker's path; not going towards or moving away.

Attacking Tires
Automobile Tires: AC: 12, HP: 2 (can be popped with penetrating or slashing weapons) -4 to hit when vehicle moving.

Heavy Truck / Airplane Tires: AC: 12, HP: 4 (can be popped with penetrating or slashing weapons) -4 to hit when vehicle moving.

For each tire blown out the Driver must make a Drive (Dex) check at a -1 penalty per tire or wreck the vehicle. This must be rolled each round until the vehicle stops.

Damaged Vehicles and Driving
A vehicle taken to half hit points is considered so damaged that the Driver has a -2 to all Drive checks. When a vehicle loses all its hit points it stops moving and is out of commission.

PASSENGERS
Vehicle Cover
Enlosed Vehicles give passengers and driver a +6 bonus to AC for cover. Open-Top Vehices give a +4 bonus. Motorcycles and ATV's give a +2.

Targeting Passengers
PC's must state they are aiming at Passengers before their attack.
Hit Passenger AC + Cover bonus + Driver bonuses to Vehicle AC.

Attacks from Vehicles
Attacks on even surfaces such as pavement are at no penalty. Rough terrain such as bumpy roads, fields, or other off-road conditions may incur a -2 or -4 penalty.
Other penalties from the DM may apply as well.

RAMMING/COLLISIONS
To successfully ram a vehicle or other object a Driver must make a Drive Check with a +4 bonus. If successful the vehicle plow into its target. Tanks are good at ramming things, especially smaller vehicles.

If two vehicles are attempting to ram each other, each Driver makes a normal Drive Check with a +4 bonus. Whomever makes the highest roll has the advantage; the other Driver must make a second Drive Check or wreck his vehicle. If both miss,  nobody hit. If it's a tied roll, both take damage and both make Drive Check to see if they lose control.

Damage
Crashing or ramming vehicles take 1d6 points of damage for every ten miles per hour they are travelling. Armored vehicles multiply this damage: x2 for Light armor, x4 for Medium armor, x8 for Heavy armor.

Sideswipe/Grazing/Pushing
Grazing a vehicle as a sideswipe does 2d6 damage to each vehicle and none to the Passengers. For armored vehicles follow the same damage guidelines as above. A sideswiped Driver must make a Driving check or lose control.

Pushing another Vehicle off the road or into obstacles is a Ramming Maneuver as above. 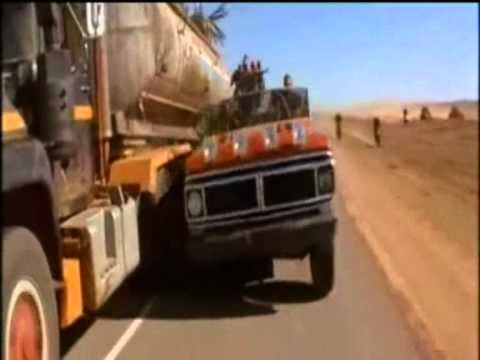 PASSENGER DAMAGE
Passengers take half damage from all wrecks and collisions (except for grazing/sideswiping.)
Passenger damage can be reduced by the following:
A seat belt reduces the damage by 25 percent.
Airbags reduces the remaining damage by 25 percent.
A Saving Throw (Death) allows the Passenger to reduce the remaining damage by 50 percent.
Damage reduction is cumulative and follows the order of seat belt, then airbag, then finally Save.

If a Passenger in the Vehicle is brought below 0 hp but has more than -10hp he can make a Saving Throw (Death). IF successful the Passenger is stabilized but unconscious and in critical condition. For each hour they are without medical help they must roll another Saving Throw or die.

If they are at -10 hp or lower or the after wreck Saving Throw is failed the Passenger is dead at the wreck.

VEHICLE CHASE
Short and Sweet: Mark starting positions at beginning of combat.
Use the Vehicle Combat Speed (10' for every mph of speed) to determine distance each round.

Obstacles such as other traffic, pedestrians, barricades, etc are avoided with successful Drive Checks. Failure is handled as failing Drive Checks and Ramming and Damage rules above.

Posted by David Baymiller at 9:11 PM