Psoglav: a Slavic Ghoul for your OSR games

The Psoglav is a ghoulish creature of Serban and Croatian mythology. The creature is described as having a human torso and arms with horse legs, a dog's head, and a a single eye either in the forehead or just the left eye. It has numerous sharp iron teeth in it's muzzle.

They are corpse eaters, often digging up graves for fresh human carrion. They will kill for human meat as well, stalking the endless forests and pouncing on unwary travelers and woodcutters. They are highly intelligent and more than capable of setting ambush and even traps for their prey..

They are said to dwell in deep caves which possibly connects to a dark land below with numerous gemstones and other shiny trinkets collected from the dead.

It is also possible that the Psoglav is a cursed man or woman, a Slavic version of a Lovecraftian ghoul or wendigo. A cannibal who is cursed and twisted by some dark god, chaos, or other force into a monstrous boogieman of the forests. 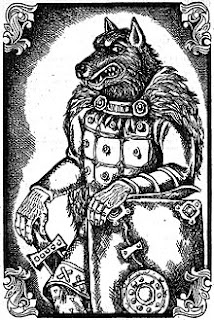 In combat the creature attacks with one bite with its iron teeth. If the Psoglav's bite beats the target AC by 5 or more on the attack it has latched onto the with its iron teeth and viciously shakes its head ripping open a gory wound doing an extra 1d8 damage.

The creature can leap up to ten feet high and a distance of thirty feet. It can see in the dark out to 60'. It also has a keen sense of smell and can track a creature on a 1-3 on a 1d6 and is only surprised on a 1 on a 1d6.

Finally it is resistant to damage due to its unnatural nature. It is only hit and damaged with iron, magic, or fire.

Art by Anthony Rivero
Posted by David Baymiller at 5:15 PM