Hyborian OSR: Guardians of the Tower: Mog'thaur and the Stygian Man-Serpent 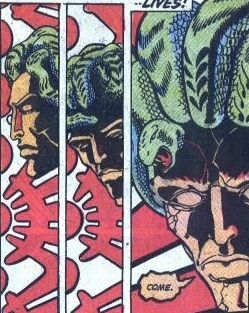 Working on the Serpent Tower room descriptions.
Also working on tomorrow's game.
Here's two of the Tower Guardians to tide us over while I input data.

Mog'thaur, Guardian Demon of the Treasure Vault
Hd 8, LE
Hp 48
Ac 12
Hit +8
Save 10
Ten feet of slimy netherworld flesh and bone; part ape, part crab, and part frog. Mog'thaur came under the control of the Prophet in the past before the journey north. He is bound to protect the treasure vault on this floor. He cannot attack members of the cult but any strangers will feel his pent up wrath and hunger.

Mog'thar has darkvision out to 60' and can cling to walls and ceilings like a massive slimy spider. He uses the darkness in the chamber to his advantage, hiding in the shadows on the ceiling or walls. He is large enough to grab an unsupecting victim while clinging to the ceiling, lunging out of the dark and surprising foes automatically or on a 1-3 on a 1d6 if they have a torch or lantern. Once he reveals himself he disregards stealth attacks the intruders savagely with two claw attacks (1d4 damage each.) If both claws hit the victim must make a Strength check with a four penalty or be drawn to Mog'thar's maw for an additonal 1d6 bite damage.

He will fight to the death as he is bound too. He can be hit with normal weapons but regenerates 3 hit points per round with the exception of fire.  If not burned when brought below zero hit points he will revive even from death. A favored trick of his, when depleted of hit points, is to play dead when he revives, waiting for an opportunity to attempt to attack from surprise. If he is dismembered his parts will send tendrils of flesh out to each other and his body will rejoin within two rounds. If his parts are separated by walls or distance the limbs and head will die off and new ones will grow from the bulk of his fetid body. If dismembered and/or beheaded his head can still bite and his claws can still.......claw until the parts are rejoined. Each gets a separate attack doing 1d4 damage.

The Man-Serpent is 20 feet of black scaled death, a snake's body topped by a slightly alien yet strangely beautiful human face. The creature was summoned by the Prophet as a guardian to the tower and moves freely through the well shaft at night, stalking careless slaves and guards for sport and food. It lairs on the seventh level.

The creature is a master of stealth. It can see in the dark up to 90', can hide in shadows and move silently as a thief with an 80%, and can climb walls with a 95%. If it achieves surprise the Man-Serpent gains a gains a +4 bonus to attack.

The most dangerous ability of the creature is its ability to charm a victim with its powerful gaze and its haunting alien voice, beckoning the victim to come to it. It will speak in Old Stygian but a victim will understand the words in his mind. A Saving Throw is allowed. If failed the victim will come towards the Man-Serpent, entranced by its eyes and voice, and vulnerable to its attacks. The Man-Serpent gains a +4 bonus to attack a charmed victim. If the victim succeeds on its Saving Throw it is immune to the creature's charm attack for 24 hours.

It can attack with its fanged bite for 1d4 damage and attempt to wrap its body around a target for 1d6 crushing damage. Once wrapped a target must make a Strength check with a -4 penalty or take automatic crushing damage each round. A victim is allowed this Strength check each round on his turn to break free. If attacking from surprise or while the victim is charmed the Man-Serpent wraps the throat of its victim on a successful hit and does 1d8 damage per round. It is limited to one victim per round with its crush or strangle attack. 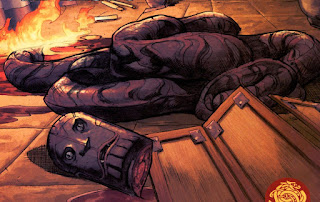 Posted by David Baymiller at 2:31 PM