Clarified a couple of rules which came up in our Western game the other day.
The gunfighter duel is based off of my Oriental OSR dueling rules found at the bottom of the page here.

Gunfighter Duel
1. Two or more gunfighters square off and begin the duel.
2. They take a number of rounds staring each other down, each round of the stare-down adds to potential damage done when they draw and fire (see below.) They may use abilities such as Steely Gaze, etc. They do not roll initiative in the combat until one decides to draw.
3. On the round one decides to draw they all roll Fast Draw initiative. 1d6+Dex bonus+any Fast Draw bonus from the Gunfighter class.
4. The winner goes first and makes his attack roll. If he hits the first shot (if more than one taken) is multiplied by the damage modifier from the number of rounds they were in the stare-down. If the one shot is still alive he gets his turn on his initiative. Normal combat then ensues.

For Example:
Two Gunslingers square off and stare-down for four rounds: the damage multiplier is x5.
One decides to draw and initiative is rolled. The winner draws first and fires, rolling a successful hit. He rolls 1d8 damage for his Army revolver. He gets a 5 on the roll. The damage is x5 so his shot does 25 damage to his foe.

Multiple shot rules such as fanning the hammer can be used in the attack: it is a normal attack roll and any of my attack options can be used. One of our guys fanned the hammer against his foe during their duel and hit with all four shots although only the first shot rolled gets the damage multiplier.

The gunmen are making no extra attempt to defend themselves and the extra time lets them place their shot in a vital are if they hit their target, thus the damage multiplier.

Expanded Gambling Rules
For simple gambling in my games the gamblers declare how much they are betting, roll a gambling (and cheating check if they are inclined) and the winner wins the bets.

For slightly more in-depth and money risk rules use the following:
1. The gamblers make the initial bet.
2. Those gambling in the game each roll a secret gambling and cheat roll with only the DM watching.
3. Each gambler can up the bet in turn. The other player's much match it or drop out. This continues until one calls and everyone reveals what they rolled plus modifiers. High number gets the bets.

This is simple enough to cover must cards games and adds an element of strategy, bluffing, and risk as well as excitement rather than a standard roll. 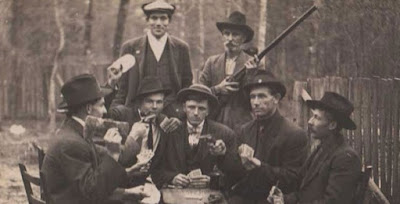 Posted by David Baymiller at 3:11 PM