Equipment.
Everyone needs it. 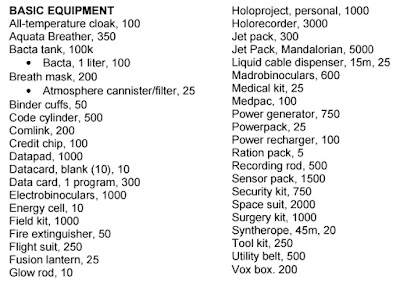 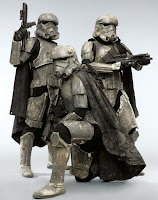 All-temperature cloak, 100
This wrap-around cloak protects its wearer from the elements. +2 Saves and checks vs severe weather.

A Bacta Tank and a supply of Bacta is expensive, so much medical equipment is usually found only in hospitals, aboard Capital Ships, and within major military bases. Each hour of treatment consumes one liter of Bacta, which costs 100 credits. A typical Bacta Tank holds up to 300 liters of Bacta, and the Bacta Tank must hold at least 150 liters at all times to provide any benefit. Only one creature can be immersed in the tank at any given time. The bacta initially heals 1d8 hit points and then 1 hp per hour of immersion.
Bacta, 1 liter, 100

Binder cuffs, 50
Binder Cuffs are Durasteel restraints designed to lock two limbs of a prisoner together, normally the wrists or ankles, but it is possible to lock one arm to one leg or use the Binder Cuffs to hook a prisoner to a tree. The cuffs have a Damage Reduction score of 10 and 20 hit points.  Breaking them requires a Strength check with a 16 penalty. If the penalty brings the Str score to 0 or less there is no chance.

Removing them without the seven-digit release code requires a Repair check with a 12 penalty. The Binder Cuffs can be attached to the limbs of any creature of Large, Medium, or Small size. 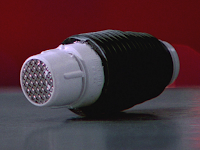 Standard handheld model with a range of 50k/low orbit.

Comlink, long range, 250
Range of 200 kilometers or high orbit. The unit is a backpack-sized Comset. For double the cost, a Long-Range Comlink can be miniaturized to a wrist-sized unit.

Credit chip, 100
The Credit Chip is a small, flat card that features a security codeout and credit algorithm memory stripes. The chip can hold a specified number of credits appropriate to the government that issued it, or it can draw from a specific account held by the user. Credit Chips not only allow quick and easy transfers of funds, but also protect users from theft.

Modifying a Credit Chip so that government and bank computers think that it draws on a different account or that it has a different value stored is almost impossible. The bank systems are fortresses. To do so involves a Computer check with a 20 penalty.  Even worse, you won't know if your check succeeded until after you attempt to use the modified Credit Chip. If you fail, the government or bank computer orders the chip's Self-Destruct programming to activate, ruining the chip. If you fail by 5 or more, the chip's Self-Destruct programming activates, and the government or bank computer traces your location, dispatching security personnel to apprehend you.

Data card, 1 program, 300
The datacard is programmed with specific information giving the user a +2 on checks relevant to the information.

This device magnifies distant objects in most lighting conditions out to 10 kilometers. An internal display provides data on range, relative and true azimuths, and elevation. Viewing options include zoom and wide-vision observation. Electrobinoculars also feature radiation sensors and a nightvision mode.

Energy cell, 10
A small flat battery that provides power to most devices an a few small weapons.

Fire extinguisher, 50
If used for its intended purpose, the extinguisher can put out a fire of up to 10 squares in size, at a rate of two squares per round before it is depleted. A full round blast also provides cover in combat (-4 to hit) and spreads one square for each round it is blasted. The cloud disappates in three rounds. Replacement cartridges cost 25cr and takes one round to load.

Flight suit, 250
The Flight Suit is a one-piece coverall that provides life support, protects the wearer from hostile environments, and prevents the wearer from succumbing to the adverse effects of high-velocity flying. A Flight Suit and helmet provide up to 10 hours of life support. As long as you have life support remaining, you are immune to any hostile atmosphere or inhaled Poison hazard. The suit also grants a +1 to AC.

Fusion lantern, 25
A hand-held light source larger than a Glow Rod, the Fusion Lantern produces light and heat. The light spreads out from the lantern, producing illumination in a 9m radius.

Glow rod, 10
A Glow Rod is a portable illumination device that projects a beam of light up to 10m.

Holoproject, personal, 1000
A handheld, personal hologram transmitter can be used to view real-time or recorded three-dimensional images or to pass the information through a Comlink connection. This storage device has enough memory to store about 1 hour of a Holo recording, or 1000 Holo images.

Holorecorder, 3000
Handheld. Can store up to 200 hours of images and has ports for recording rod input for expanded memory.

Move 100m per round. A fuel cell holds 20 rounds of fuel. It can be used for short bursts or sustained flight. If it runs out of fuel mid-flight the user falls on his initiative the next round. A flame projecting weapon can be hooked to the fuel cell. For every burst of fire from the flame weapon subtract a half round of fuel. If a user is down to a half round of fuel he may move up to 50m and try to get somewhere safe before he falls the next round. can lift up to 180 kg while flying. Replacement fuel cells cost 100 credits.

Liquid cable dispenser, 15m, 25
Cable Dispensers contain a special liquid that instantly solidifies upon contact with either atmosphere or vacuum to form a tough, lightweight, flexible cable attached to a grappling dart. The dispenser contains enough liquid for 15m of cable, and is refillable at authorized outlets. can safely support up to 560 kg

Macrobinoculars, 600
View out to 1k. Basic info such as distance and elevation. More powerful models could view longer distances, even into low orbit.

Gives a +4 bonus to medical checks.

Medpac, 100
Medpacs are compact packages designed to both equip and trained medic for work in the field and allow untrained individuals to apply first aid in emergencies. A Medpac contains bandages, Bacta, synthetic flesh, coagulants, stimulants, and other medicines designed to help an injured patient recover quickly. Heals 1d6 hit points. A maximum of 3 can be used on one person per day.

Once you use a Medpac, its contents are expended.

If a Power Generator is destroyed while in use, its fusion reactor overloads and explodes, venting plasma into the surrounding area. When a fusion reactor explodes every target within 6m must make a Saving throw or suffer 8d6 points of energy damage. If the Save is made the target takes half damage.

Powerpack, 25
A Power Pack is a compact rectangular battery that fits into the grip or barrel of an energy weapon, such as a blaster, to provide the power needed to fire it. A Power Pack can be recharged with a Power Recharger.

Ration pack, 5
Ration Packs are compact meals that take up little room (You can fit six in a pouch designed to carry a Datapad), but have all the requirements to nourish a person for one day. Each Ration Pack is geared for a range of Species. The food isn't appetizing, and it doesn't include water, but it does prevent malnutrition.

Recording rod, 500
Long, clear cylindrical tubes that recorded and played audio and visual images. The data was stored in chips or storage crystals and the recording material played in two-dimensions on the exterior of the rod. The controls were located on the ends of the rod.

A portable scanning device, the Sensor Pack is a bulky rectangle featuring a variety of dials and switches, a readout display, and a scanning dish. It provides general details on comm signals, life forms, and hazards within 1 kilometer. Operating a Sensor Pack requires a full round and grants a +8 to Wisdom/Search until the end of your next round.

Security kit, 750
A Security Kit is a set of special tools for bypassing electronic and mechanical locks. It usually includes electronic components and dedicated sensor devices. On most worlds, possession of a Security Kit is illegal for anyone who doesn't have the proper permits, such as members of law enforcement agencies and professional security experts.

A Security Kit is required to bypass traps or security systems using the Computer skill. A Security Kit contains a Comlink that monitors frequencies typically used by silent alarms, so the user can know if such an alarm has been triggered at any point during the operation.

Space suit, 2000
This bulky coverall contains a sealed life support system that provides everything the wearer needs to survive for 24 hours in the vacuum of space or any other hostile environment.

As long as you have life support remaining, you are immune to any atmosphere or inhaled Poison hazard. The suit also grants a +2 to AC.

Surgery kit, 1000
This small kit contains the instruments a character needs to perform surgery on a wounded character.

Syntherope, 45m, 20
Although not as compact and convenient as a Liquid Cable Dispenser, Syntherope is stronger and more durable. A coil contains 45 meters of Syntherope, and unlike liquid cable it is meant to be reused. can safely support up to 720 kg

You need a Tool Kit to reprogram a Droid, or to Repair a damaged Droid or Vehicle. A Tool Kit also makes repairing devices much simpler.

The standard Tool Kit represents a broad collection of tools designed to take apart, analyze, modify, and rebuild almost any technological device. Most technicians personalize their Tool Kits over the course of years, but almost all contain the tools in the below table.

Many of these tools can be used as makeshift weapons. Since they aren't designed for combat, they impose a -2 penalty on attack rolls. (Droids with such Tools on Tool Mounts don't suffer these penalties, since they don't have to deal with the oddly shaped handle.)

The standard Utility Belt has the following items:


Vox box. 200
A Vox-Box is a simple audio playback unit with 12 reprogrammed phrases in Basic ("Yes." "No." "Go Away." "How much?" "Please take me to someone with authority." "I understand." "I need assistance." "I can help you." "I mean no harm." "I am hungry." etc), each with its own button. These devices are useful to races that understand Basic but can't speak it (Such as Gamorreans and Wookiees). Devices that speak these phrases in other Languages also exist.

Altering one or more of the Vox-Box's pre-programmed phrases requires a Computer check. with a -4 penalty.

Posted by David Baymiller at 2:11 PM