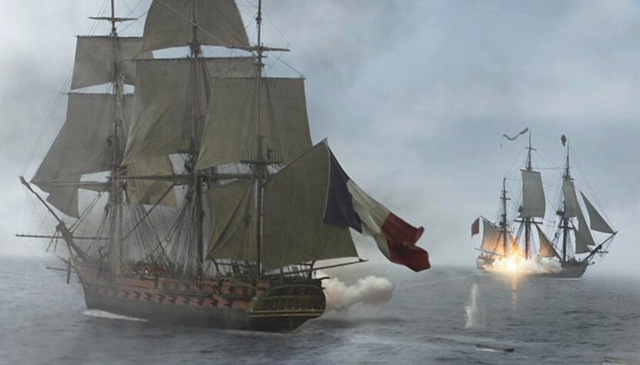 This played well when I tested it.
No doubt there will be some tinkering along the line. I always tinker. It's an obsession.

I have been tinkering with my own Naval rules for  while. I have at least a dozen different naval rules from incredibly rules light to Rolemaster and GURPS. I've read and digested them all but they aren't quite what I am wanting for my own games. Thus I have tinkered and come up with some ideas, many of them familiar, for a usable light rules system easily compatible with Basic, Labyrinth Lord, Swords & Wizardry, etc.

I'm going for familiar concepts and fun easy to use rules, not a hardcore lesson in minute details of ships, cannon, and life at sea circa the golden age of piracy.

First we'll look at some basic ship types. I am no expert and there were many conflicting sources of ships. I boiled that down to a few recognizable ship types in the Pirate genre.
Roll with it.

Following that is the basic Sailing rules and the actual combat rules with cannon stats, etc.

AC
Armor class to hit the ship. Modified by the Captain's Sailing bonus and Ship Maneuverability bonus. .
Faster ships receive an AC bonus of +1 for every full 10' it is faster.

Maneuverability
How nimble the ship is. It adds to the ship's AC and to attacks against other ships.

Speed
Basic travel feet per round. This represents an average movement. Windy weather (or lack of) can greatly affect the speed of a ship. (See Wind Conditions, Labyrinth Lord, pg 57.)
Daily movement equals the movement rate x 0.6 in miles per hour.

Sailing Ships
A turn takes one round to give the order and prep for turn.
To turn ninety degrees takes two rounds past the prep round. (Rounds one and two.)
To turn one hundred eighty degrees takes another two rounds past the ninety degree turn. (Rounds three and four.)
While turning the ship continues to move forward in the direction it is turning. 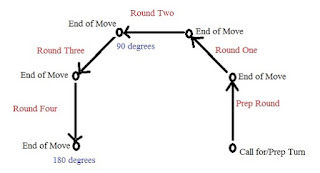 Auxiliary/Rowing Ships
One round to ninety degrees, two rounds total for one hundred eighty degrees.

Crew
The number of men to operate the ship at full efficiency.
Having less than a full amount of crew can severly effect the operation of the ship. Speed is reduced, Sailing checks receive a negative modifier, the time taken to turn the ship, effect repairs, and load guns increases, and the number of guns in a fight decreases.

Passengers
How many non-crew (troops, paying passengers, etc) can comfortably be carried. For every passenger space not taken up one ton of cargo may be added.

Cargo
The absolute maximum weight of cargo carried by the ship in tons without causing problems. For every ton of cargo space not used one extra passenger can be comfortably lodged.

Guns
Total number of guns that can be fired and their facing. Broadside is the number on one side of  ship. There is the same number (minus damaged cannon) on the opposite side,. 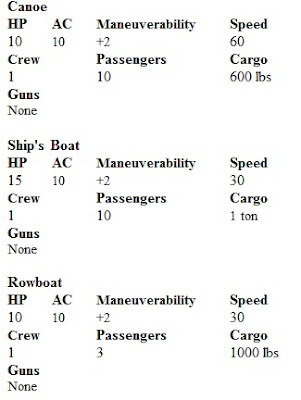 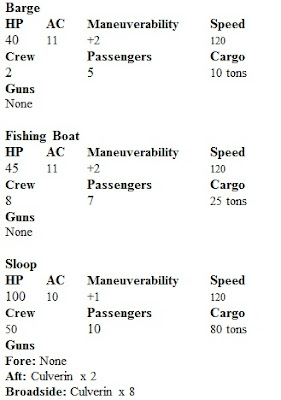 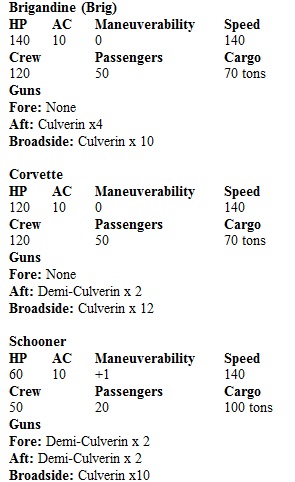 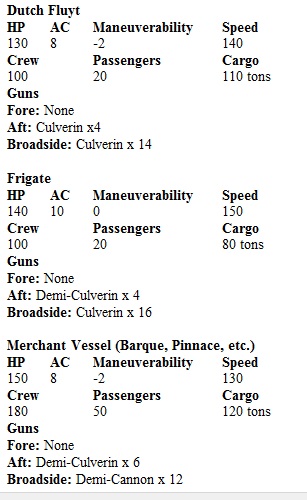 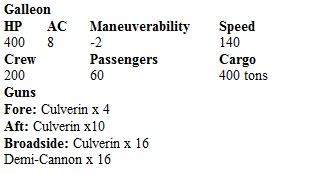 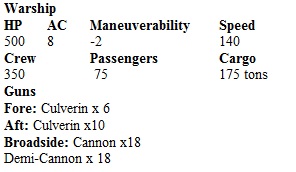 SAILING
The Sailing Check
This is the most important check for the characters running things on the ship. It is a simple Intelligence check with modifiers.
The Pirate (Sailor) class gains a bonus to this check at certain levels. NPC's experienced at life on the sea will certainly be assigned Sailing bonuses by the DM.

For opposed Sailing checks both parties roll an Intelligence check with the Sailing bonus and other bonuses/penalties.

The best roll under Int wins. If both made the check by the same amount then  it is a tie and continues into the next round with no bonus to either.

Navigation
Intelligence +Sailing bonus. +/- chart quality bonuses.
For the most part sailing from one place to the other is pretty straight forward with decent charts and navigating instruments. This is left very open for the DM to add challenges and encounters getting from one place to another. Pirates, creatures, inclement weather, mutiny, etc can all make for a challenging voyage.

Spotting other Ships
Ships on the open sea can be spotted miles away. The higher your elevation above the water the further away you can spot other ships, etc.

Spotting a ship is automatic if the lookouts are paying attention. The distance at which they can be spotted are given below in miles and is adjusted for lighting and weather conditions.

To keep it simple take the base spotter location which shows how far out to water in miles a spotter can see.
Multiply this by Light modifiers  then multiply by Weather modifiers. 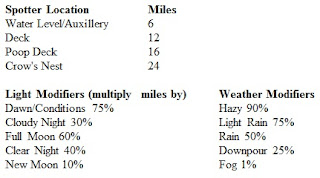 A ship running with it's lights out may require a surprise check by the lookout at the DM's discretion.

Tactical Roll
Opposed Sailing checks.
Winner gets a +2 bonus to Sailing checks for the round. This affects initiative, attacks, flee/pursue, etc. Anything involving the Sailing ability.

Movement
Ships move in reverse order of initiative, so that the winner gets to react to the movements of his opponent.

Every ship has a speed measured in feet which the ship can move per round. This can be modified by daily wind conditions.
(See Wind Conditions, Labyrinth Lord, pg 57.)

Attacking
Roll 1d20 +Sailing bonus + Ship Maneuver bonus + Tactical bonus if won.
If the total is higher than the defending ship's AC then a hit has been scored.

The gunner can attack once for each four guns (a salvo.) A full salvo of four guns grants the gunner a attack bonus of +1. Any left over are fired together as a partial salvo but with no +1 to hit bonus.

If 10 guns were fired in a broadside  there would be three attacks, two full four gun salvos and one partial two gun salvo with no bonus to hit.

Damage is by gun type (culverin or cannons.) See damage below.
Damage for each successful hit is rolled gun type and multiplied by the guns in the salvo.
If a full salvo of culverin hit the damage would be 1d4 x 4. A partial salvo would be multiplied by the lesser number of guns.

The damage listed is what the guns do to ship hit points. This is multiplied x5 vs normal character hit points. Range has five increments. Each increment past the first has a cumulative -2 penalty to hit.

Repair
1 ship hit points per 5 men per turn. This task requires full attention, so any crew involved in repair cannot take any other action during a turn repairing a vessel.

For complicated repairs (steering, extensive hull damage, etc as DM sees fit) a foreman must be in charge and must make a Repair check to guide the crew and gain the normal daily repaired ship hit points.

Grapeshot
+2 to hit. No ship damage. If a crit is gained 2d6 crew are hit for normal Cannon damge.

Critical Hits
Total attack roll and bonus +5 over AC needed to hit.
With gun fire each crit causes 1d6 crewman to be hit for normal (and usually lethal) gun damage as well as a roll on the critical hit table.

Critical Failure
Natural 1 on the d20 roll.
A roll on the critical failure table must be made.

Boarding
When two ships wish to board one another, their mutual intent makes the action succeed with no chance of failure. If only one side wishes to board, the attacking side must win an opposed Sailing check (Int check with Sailing and Ship Maneuver bonus) with a -4 penalty to the attacking side.

Normal character combat ensues when the two crews clash. Characters who are boarding another ship suffer a penalty of –2 to attack rolls and armor class.

Once crew members come into contact with one another, combat ensues following the standard combat rules.

Ram
Normal naval attack roll.
A desperate maneuver, if the attacker hits he does 6d6x5 hp damage to the enemy ship but takes half of that damage to his own ship.

Flee/Pursuit
Often a drawn out affair with each ship maneuvering towards favorable currents, manipulating rigging and sail to maximize and compete for the wind, and a variety of other tricks. Pursuits often lasted hours or even days.

Every hour the ships roll opposed Sailing checks (including the Tactical bonus if won ) + Ship's Maneuver bonus. The faster ship also gains a  +1 bonus per 10' for speed faster than the slower ship.
If successful the fleeing ship doubles it's lead on the pursuer.
If successful the pursuing ship cuts the fleeing ships lead by half.
If tied or both fail the distance remains the same.
Eventually the pursuer will catch up to the ship for an attack or will fall so far behind as to give up the chase. 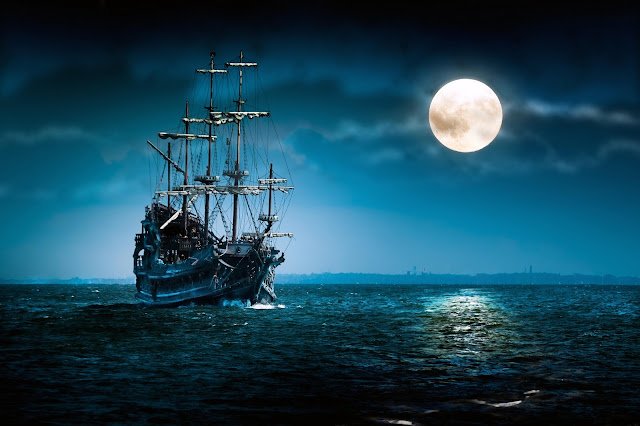 Posted by David Baymiller at 3:30 AM