One of my favorite DC War characters from my childhood in the seventies and eighties, from Weird War Tales: J.A.K.E. The GI Robot 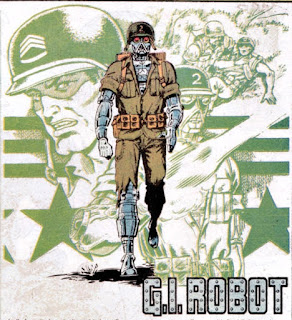 J.A.K.E. the GI Robot
(Jungle Automatic Killer Experimental)
ARMOR CLASS: 2 [17] (armor plate and Dex)
HIT DICE: 8
TOTAL HIT BONUS: +8
ATTACKS: 2 fists or weapons
SAVING THROW: 12
SPECIAL: see below
MOVEMENT: 12 (running 18/swimming 18)
The GI Robot's body is hardened steel. It is stronger, faster, and tougher than a normal man.
⦁ Strength: J.A.K.E. is very strong and possesses incredible strength. It gains a +3 to all melee damage. It can lift up to six tons and bend a crowbar.
⦁ Speed: As a Robot J.A.K.E. can run and move at speeds that are beyond human physical limits. It can run at a rate of 18. The Robot is also designed to swim like a torpedo through water at a move rate of 18. It is surprisingly buoyant and can surface easily.
⦁ Agility: As a Robot J.A.K.E. agility, balance, and bodily coordination are enhanced to levels that are beyond the natural physical limits of the finest human athlete. +3 to his AC.
⦁ Stamina: As a Robot J.A.K.E. can exert itself well beyond the human limit as long as he has sufficient power. J.A.K.E. automatically succeeds on any Constitution checks.
⦁ Reinforced Hull: J.A.K.E.'s body is composed of armor plated steel, making it durable to most attacks. +4 to AC and Reinforced Hull x1 as per vehicle rules (immune to personal weapons, 1/2 damage from autocannons, 1/4 damage from grenades.)
⦁ Intelligence: J.A.K.E. is capable of rapid analysis of huge amounts of data. Although he must follow commands from the soldier he is assigned to J.A.K.E. is a learning machine and capable of making decisions on its own.
⦁ Ambidextrous: J.A.K.E. can use both hands equally well, often firing both hand machineguns together.
⦁ Rocket Jet Boots: J.A.K.E. has been equipped with short-range jets running off of its power source. They allow a short flight of three rounds with a movement of 12 per round.
⦁ Senses: J.A.K.E. has infravision and night vision allowing it to see perfectly in darkness out to 90' as well as acute hearing. It is only surprised on a 1 on a 1d6.
⦁ Limitation: J.A.K.E. is not able to communicate verbally nor show emotions, if he truly has any. 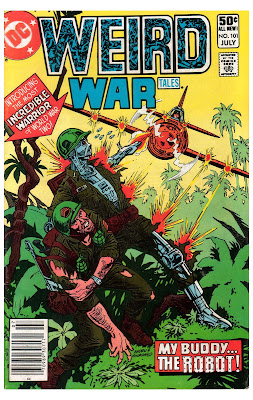 J.A.K.E. is equipped with a number of lethal weapons:
Its metal fists do 1d6 +3 with each hit. It can attack with both fists each round.

J.A.K.E.'s arms have an internal gun/launcher system with a variety of ammunition. When firing, the projectiles emerge from his fingertips. Spent brass is ejected through ports in the top of the hands. Ammo for each is stored inside of J.A.K.E. and there is enough for 12 combat rounds of each type.
⦁ Light MG (1D6+1) The most common ammo used by the robot.
⦁ Flamethrower (1d6, no chance to explode) Often used against tanks or large numbers of infantry. 12
⦁ Mini-Rockets/Torpedoes(2d6+2, 15' explosive radius, 75' range) Also used against large numbers of infantry and boats or submersibles.

J.A.K.E. can use conventional weaponry as well as attach specialty equipment by removing his lower arms and attaching one or two of the following:
⦁ Medium Machinegun and ammo belt can.
⦁ Multi-shot RPG/Mortar Launcher
⦁ Larger Flamethrower 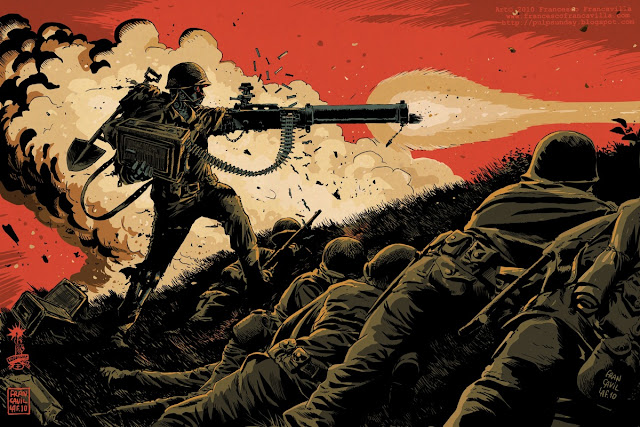 J.A.K.E. is normally dressed in marine fatigues, boots, and helmet with a backpack of spare parts and tools.

J.A.K.E.could be assigned to a PC in the squad, perhaps his original handler Sgt Coker has died.
I might stat up the robot dog, cat, samurai, sumo, etc later. Yes I'm serious those are a thing. 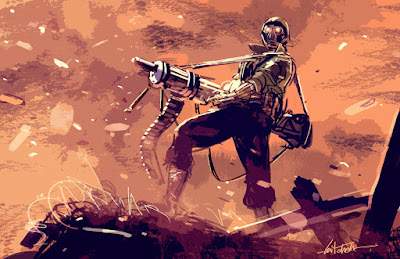 Posted by David Baymiller at 4:33 PM