High in the mountaintops, past the eternal snowline, and into the forbidding rocky crags lie hidden monasteries where strange priests burn incense, fast, and chant to their Gods seeking enlightenment into the nature of life and the universe. These remote enclaves are difficult to reach but not impossible and raiders sometimes seek them to steal forbidden knowledge and treasure.

An Undead Yeti Guardian is created when a Yeti corpse is reanimated by the mountain priests or divine powers to guard and protect their monastery. The undead Yeti is a massive withered and gaunt frozen thing covered in white fur. If the creature died a violent death it will show the wounds which killed it. They will haunt the area around the monastery they are protecting, often hiding away in nooks and other hiding spots at the base of the walls, waiting for trespassers to tear apart. They are terrifying foes, relentless and ruthless, they do not quit until their prey is caught and killed. They can be called off by the priests it is guarding to allow visitors to pass. Sometimes one will be called upon to travel with a priest for protection while he travels down the mountains on whatever journey he is called upon.

The undead Yeti's primary attack is it's massive claws. If both hit in the same round the creature can make an additional attack to grab its opponent for a bone-crushing hug doing an additional 1d8 damage. This hug also allows the Yeti to drain one level of life from its victim. It will continue to hug the victim automatically each round doing 1d8 damage and draining one level of life until the victim dies, makes a Saving Throw to break free, or the creature takes enough damage from another enemy to gain its attentions. If the thing's claws (and hug) are incapacitated it can bite for 1d4 damage..

The undead Yeti nestles into the snowy nooks and crevices outside of the monastery's walls. It will remain there for years if necessary until called forth by the master of the monastery or an intruder comes near. While hiding in the snow it is almost completely invisible and will surprise trespassers on a 1-5 on a 1d6. During storms the creature can move around and still surprise foes on a 1-3 on a 1d6.

Due to its undead state the thing is Immune to cold as well as charm and sleep spells. The creature is only vulnerable to fire, spells, +1 or higher weapons, and silver. Fire does x2 damage to the creature. It's undead nature also allow it to climb as per the Spiderclimb spell. 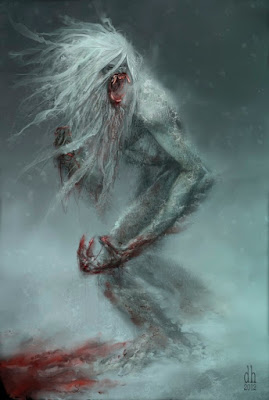 Posted by David Baymiller at 1:34 AM No comments:

In keeping with the winter theme I present a new horror for your travelers in the icy reaches. 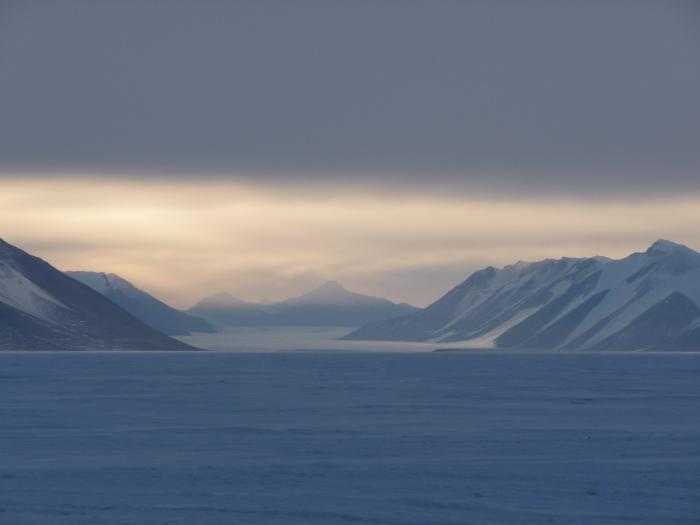 In the cold wastes there live vicious creatures roaming in packs, tunneling through ice and snow, homing in on the body heat of other animals and stripping them of flesh. They are a menace to every warm-blooded living thing and are particularly lethal to explorers and raiding parties huddled in sleep.

The Carnivorous Ice Worm is five to six feet in length and big around as a man's thigh. It appears as a pale naked tube of flesh with a faint fiery glow emanating along the inner core of the worm and from the mouth. The front end of the worm is a mouthful of multiple rows of ringed cutting teeth doing 1d4 damage per successful attack. Four red slits in the worm-flesh are set around the worm's 'head' just behind the teeth. These slits allow the worm to sense body heat up to a distance of 120' in snow and up to 60' while under ice. The worm and its pack will be drawn to any source of heat that is not another ice worm and attack, bursting from beneath the snow or ice trying to gain surprise (see below).  The worms are connected as a pack: for every two worms attacking a single target the worms gain a +1 bonus to attacks with a max bonus of +4.

The worm's belly and digestive system secrete a mix of chemicals that create fairly intense heat. The secretions give the worm the ability to use its saliva to bore a hole through snow and ice allowing it to travel almost unseen. The movement rate above ground and tunneling through snow is 120 and the movement rate through ice is 90. While moving through snow the worm surprises its prey on a 1-3 on a 1d6. When travelling through ice the surprise goes up to 1-4. On the worm's death the cocktail of heated secretions will still be good and hot for up to one hour plus ten minutes per hit point of the worm after the creature's demise. The stomach can be stripped out and used to keep one person heated in the cold for this time.

The tail of the ice worm is tipped with a small stinger and poison glands. The sting only does one hp of damage but the victim must make a Saving Throw (vs Poison) or be paralyzed by the venom for 2d6+4 rounds. While helpless the victim will most likely be swarmed by the whole pack to be devoured. The ice worm's venom glands, once they release a dose, take three rounds to refill enough to be used again. If un-used and removed after a worm's death the venom is good for up to twenty four hours. Once dose is enough to coat one medium sized weapon. If it is split into two small weapons the Saving Throw is with a two bonus and the time of paralysis is 1d6+2 rounds. If split among five arrows or bolts the Saving Throw is with a four bonus and the paralysis only acts for 1d3+1 rounds. Posted by David Baymiller at 12:59 AM No comments:

You ever give yourself?
Weendigo eats.
Must eat more, more...
never enough.
He... he takes!
Never, never gives.
You stop weendigo...
you give yourself.
You must die.
- Martha, Ravenous (1999)

Greater and Lesser Wendigo
Cursed beings, eternally hungry for blood, meat and souls.
Greater Wendigo were never human, being malignant winter spirits of hunger and cold residing  in far remote areas in the cold north, far from civilization in deep forests and high mountaintops. They are centers of cold and darkness often summoning arctic storms to mask their presence and kill all animal life in their area allowing the beast to consume their frozen corpses. When one comes down from its northern home and encounters humanity it will go on a rampage consuming the physical bodies of victims or bargaining for their souls, corrupting those it can and changing them into Lesser Wendigo. These lesser beings are far less powerful but still very deadly and can pass on a physical manifestation of the Wendigo Curse via biting.

The Greate Wendigo appears as a gigantic gaunt figure with bone white skin and frozen lifeless eyes. Lesser Wendigo are obviously once human with white skin and often showing signs of frost bite on face, fingers, and feet. Neither are dumb beasts, they are both cunning and dangerous foes consumed by an eternal need to eat and eat and eat..... The  Greater Wendigo can tear a victim apart with its massive teeth and claws.  It can also regenerate 3 points of hp damage per round except for fire, magic, and wood from the ash tree.' It can see perfectly in the dark.

The creature generates a constant aura of fear with a radius equal to its current hit points in feet.
Those caught in the fear aura must make a Saving Spell (Magic) or suffer the effects of Fear found here.

A Greater Wendigo can summon and maintain a massive blizzard any time it wishes. The radius of the storm is a number of miles equal to half of the Wendigo's current hit points; as it loses life so does the storm. The Wendigo is nearly invisible inside of the storm surprising victims on a 1-4 on a 1d6. Those caught outside must make a Constitution check every full half hour exposed to the blizzard or suffer 1d6 hp damage from the arctic cold of the storm. Those making the Saving throw take half damage. The Wendigo will often snatch weakened victims into the sky where their screams can be heard by their companion. The fiend will then psychologically torture the living by hurling the frozen corpse from on high to shatter on the ground at the feet of the companions. Sometimes it will hurl the frozen corpse at individuals, vehicles, or even the rooftops of dwellings.

The Greater Wendigo preys on weakness and can deliver a curse upon susceptible victims within the confines of the storm. It can telepathically worm its way into the mind of one chosen victim per hour. The victim chosen will be weakened, wounded, sick, diseased, etc; consumed with fear, pain, and desperation and who believe they are doomed. It will promise to save them and end their pain if they surrender themselves to its will. Those who accept the offer take on the Wendigo Curse and become a Lesser Wendigo. The DM has heavy fiat here. The NPC can either choose or if the DM is unsure a Saving throw can be made to see if the bargain is made.

When the Wendigo Curse is accepted the victim immediately transforms into a Lesser Wendigo. Unlike a Greater Wendigo it has the ability to appear as a normal human being. When enraged, hungry, or attacking it will lose control and its true hideous nature will emerge. It will often show its true form as a psychological tactic to shock and horrify its soon to be meal.

The Lesser Wendigo can bite or claw twice per round. It is a formidable opponent taking minimum damage from all damage except fire, magic, and wood from and ash tree. It is completely immune to cold damage. It cannot fly as a Greater Wendigo can but it  can spiderclimb as per the spell and sees up to 90 feet in absolute darkness.

A Lesser Wendigo does not regenerate or heal naturally. It can only heal by eating raw flesh, gaining one hp for every two hp damage caused by its bite as it swallows the meat and blood of its victim.

Unlike a Greater Wendigo the Lesser lack the telepathic ability to pass on the Wendigo Curse. They can only attempt to pass it on curse via biting. If they choose to do this and successfully bite the victim, the victim must make a Saving throw to avoid the curse. If infected they will transform over the course of 1d6 hours. The only way the curse can be broken is by killing the Lesser Wendigo that delivered the cursed bite. Posted by David Baymiller at 3:06 AM 4 comments: