The Iron Major
ARMOR CLASS:  14 (Special forces, Dex bonus, BDU's)
HIT DICE: 5
HIT POINTS: 30 (5d6 +2 +1 Con bonus)
TOTAL HIT BONUS: +4
ATTACKS: weapons or unarmed
SAVING THROW: 10
MOVEMENT: 12
Str: 16
Dex: 15
Con: 15
Int: 17
Wis:15
Chs: 16
Special Abilities:
⦁ Iron Hand: 1d6+1 damage per hit. The major has been seen splitting steel helmets and puncing through a brick wall with the hand.
⦁ Iron WIll: +4 to Saving throws to resist torture or fear.
⦁ Commander: The Iron Major has access to a large number of troops and resources. Men, tanks, all at his command.
⦁ Rally: He is an impressive command figure and has the respect of his men. He can take one full round to rouse  his men with speech or actions, using his forceful personality to motivate them. After one full round his men receive a +2 to AC and a +2 to Hit. This lasts for six turns and he can do this five times per day.
Equipment:
⦁ Luger Medium Handgun (1d6-1, 75')

From Writeups.org:
This man was born and raised in the small German village of Mannlich. Since he was but a little boy, he prepared as much as he could for a career in the Wehrmacht . Thus, he already was a Major by the early days of the second World War.

The Major was part of Marshal Paulus ’ 6th Army, on the Eastern Front. He and his men were retreating across the frozen Don river when a Russian plane’s fire shattered the ice. This plunged the Major’s closest friend into frigid waters. The Major managed to fish out his comrade in time, but his right hand was now hideously frostbitten.

By the time the Major was able to reach medical aid, his frostbitten hand had become gangrenous and had to be amputated. As a symbol to his troops, the major had his missing hand replaced with one of solid iron, then he was sent home to Mannlich to recuperate.

Because of his iron hand and his iron will, his rigid moral code and his strict adherence to the rules, his men began to call him the Iron Major. It was a name he took to well.


Stalag 9
No longer considered fit for duty in the front lines, the Iron Major was made commandant of Stalag 9. This was an ancient castle that was serving as a prisoner of war camp. It was there the Iron Major first met the American soldier who was to become his greatest adversary – Sgt. Frank Rock. 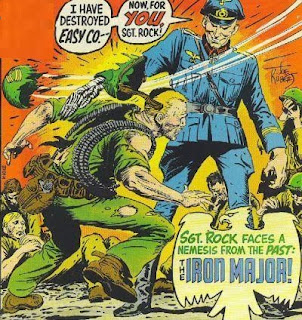 Rock was the first prisoner ever to escape Stalag 9, only to be pursued by the Major in the Forest of Forgotten Skulls. There, during a battle to the death, the Iron Major was thought slain by an exploding land mine.

But the Iron Major survived the explosion. He crossed paths with Sgt. Rock several more times before the end of the war. 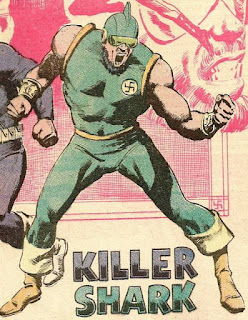 Killer Shark
General Haifisch
ARMOR CLASS:  16 ( +2 Special forces, +1 Dex bonus, +2 Enhanced, +1 Costume)
HIT DICE: 5
HIT POINTS: 30 (7d6 +2 +1 Con bonus)
TOTAL HIT BONUS: +6
ATTACKS: weapons or unarmed
SAVING THROW: 10
MOVEMENT: 12
Str: 18+
Dex: 16
Con: 18
Int: 13
Wis:13
Chs: 10
Special Abilities:
⦁ Enhanced Strength: Killer Shark can lift two tons with difficulty. His unarmed damage is 2d6+1 and he gets two attacks per round. He has easily breached unarmed doors and broken statues to pieces with one hit.
⦁ Enhanced Physique: Killer Shark gains a +2 to his AC due to his muscle mass and increased reflexes..
⦁ Saving Throw: +2 to Saving throws vs poison, explosions, and suppressive fire. His enhanced reflexes allow him to avoid all suppressive fire damage (even without cover) with a successful Save.
⦁ Hero of the Reich: Killer Shark commands much respect among the troops. When under his command his men receive a +2 bonus to Saving throws and +1 to Hit. His men must see him in action to receive this bonus.
Equipment:
⦁ Luger Medium Handgun (1d6-1, 75')
⦁ 9mm SMG (1d6, 75')

From Writeups.org:
General Haifisch was a prominent officer of the German army during WWII. Apparently he was subjected to biological experimentations by Nazi scientists, for he possessed superhuman strength.

Haifisch underwent special training supervised by Adolf Hitler himself, and has been called “the model soldier of Third Reich”. Trained as a killing machine, he was code named the Killer Shark. Haifisch quickly became the leader for the Führer’s personal shock battalion, undertaking special missions.

Hawka!
While crippling partisans activity in a town on the Franco-Belgian border, Killer Shark and his men took all of the Blackhawks prisoners, except for Blackhawk himself. Blackhawk caught up with the submarine in which Killer Shark was transporting his men, and fought Killer Shark hand-to-hand atop the submarine after it surfaced. 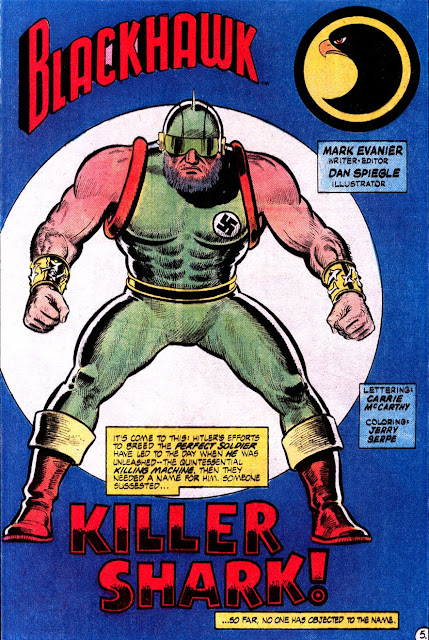 Posted by David Baymiller at 4:37 PM