Finally back on the blog.
Let's start with an oldie but a goody. One of my favorite creations from a few years ago. Statted for Labyrinth Lord but, of course, easily used with other retro-clones and original systems. 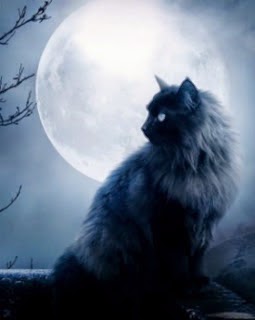 Cat, Dreamland
Requirements: DEX 9, STR: maximum of 13
Prime Requisite: WIS
Hit Dice: 1d4
Maximum Level: 10
Advance: As Thief
Attack: As Thief
Saves: As Thief
Dreamland cats come in all varieties and colors known on Earth. The center of Cat society is the city of Ulthar, where no Cat may be killed by law.
They are of human intelligence and are sneaky and watchful creatures, having a highly organized society based on military service in wars with cats from other worlds such as Saturn and Uranus. They also wage war on the rat-like Zoogs of the Enchanted Woods near Ulthar, and others who would harm cats.

Cats can speak Cat, common, Zoog, and sometimes Aklo or Hyperborean (ancient dead languages) if the Cat is particularly scholarly.

Cats Attributes are rolled the same way as a normal character, but they can only have a maximum Str score of 13 due to their small build.

Cats cannot wear armor or use any weapon except their natural teeth and claws. They can attack three times per round, two claws and one bite, for 1d2 dmg + Str bonus per attack.

Cats are stealthy little creatures. They can use the Thief abilities Move Silently , Climb Walls , Hide in Shadows , and Hear Noise as a Thief of three levels higher than the Cat. (A second level Cat makes his rolls as if a fifth level Thief.)
The  naturally stealthy cat also surprise foes 1-4 on a 1d6.

Because they are so small, cats have a lower armor class (-2) when attacked by creatures greater than human sized.

Once per night, a cat may leap from the Earth to the Moon and then back.
A group may also take non-cats along with them, with a weight limit equal to the cats' total mass.This power is rarely used by a single cat due to the dangers to be faced on the Moon such as Moon-Beasts and Cats from Saturn. A typical cat army numbers 50-100. The journey takes about one hour, and cannot be aborted once started. During this time, the leapers are protected from the dangers of space (including attacks by monsters). 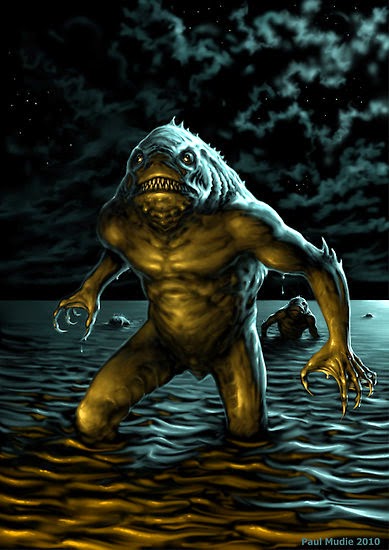 Deep One
Requirements: STR 9, CON 9
Prime Requisite: STR
Hit Dice: 1d8
Maximum Level: 12
Advance: Dwarf
Attack: As Dwarf
Saves: As Dwarf
"I think their predominant color was a greyish-green, though they had white bellies. They were mostly shiny and slippery, but the ridges of their backs were scaly. Their forms vaguely suggested the anthropoid, while their heads were the heads of fish, with prodigious bulging eyes that never closed. At the sides of their necks were palpitating gills, and their long paws were webbed. They hopped irregularly, sometimes on two legs and sometimes on four. I was somehow glad that they had no more than four limbs. Their croaking, baying voices, clearly used for articulate speech, held all the dark shades of expression which their staring faces lacked ... They were the blasphemous fish-frogs of the nameless design - living and horrible." – H. P. Lovecraft
The Deep Ones are an amphibious race, living in mighty cities beneath the cold ocean waves. They worship the mighty Cthulhu and serve two gigantic and powerful Deep Ones known as Father Dagon and Mother Hydra. They are effectively immortal, only dying by violence or accident. Their lives are arrogant, cruel, and violent; they are a warlike race raiding coastal communities to plunder gold, gather sacrifices, and, horribly, to sometime mate, for they are driven by a monstrous desire to breed with humanity to produce hybrid spawns. This is the only way they can reproduce.
These Spawn begin life as human, though they look slightly odd: "queer narrow heads with flat noses and bulgy, stary eyes". The change accelerates, often at middle age or, sometimes even earlier, with the eyes becoming akin to fish eyes, hair loss, patches of scaly skin, etc. Eventually the hybrid becomes a full Deep One and slips into the sea to join it's kind.

Deep Ones can speak Deep One, common, merfolk, and sometimes Aklo or Hyperborean (ancient dead languages.)

Deep Ones have a natural claw attack doing 1d4 dmg, and have tough scaly skin that improves their natural AC by 1 (if the Deep One is wearing armor, he uses the armor AC instead.) Deep Ones can wear any armor and use any weapon although this is somewhat limited by their aquatic natures. They will not wear metal armor underwater as the weight is too great, and they tend to favor thrusting weapons such as tridents or spears.


Deep Ones have infravision of 60 feet. They are amphibious, preferring to live in the ocean but can survive on land indefinitely. 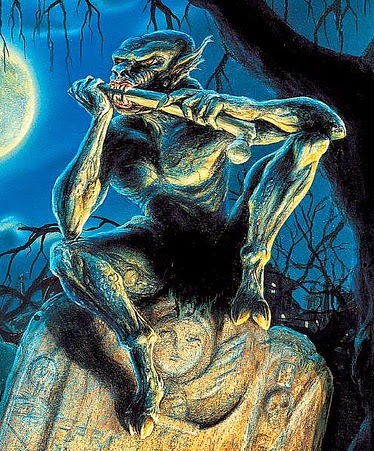 Lovecraftian Ghouls are usually described as almost rubbery textured white or green-skinned humanoids. Virtually hairless creatures with fanged, canine muzzles, pointed ears, and clawed or hoof-like feet. They are often described as covered in grave mold and rotted clothing. They can and will use tools and weapons when they can obtain them.
Ghouls live in warrens and bone-filled caverns beneath the earth. They emerge, usually at night, to rob burial sites of treasure, weapons, and, most horribly, of the dead to feast. They are not a warrior race, it is their normal tactic to retreat unless their homes are threatened, only then will they attack with great ferocity to defend their lair.
Ghouls are known to worship the Great Old One Mordiggian. His priests wear concealing hooded purple robes and metal skull-shaped masks, which double as disguises when the ghouls wish to walk among humans.
Ghouls appear to be a separate species from humans, breeding and living as their own society, but it also seems that some humans can slowly become ghouls, though the exact means are unknown.

Ghouls can speak Ghoul, their alignment language, common, and sometimes Aklo or Hyperborean (ancient dead languages) if the Ghoul is particularly intelligent.

Ghouls can wear armor but few actually do. If used it is rarely heavier than leather, as the heavier armor will negate their natural hiding abilities.In addition, their naturally rubbery bodies only take half damage from piercing weapons. Ghouls can use any weapon they obtain, but they tend to avoid ranged and two-handed weapons as they are of limited use in defending their warrens.

Ghouls have vicious natural attacks. They can claw two times per round for 1d4 dmg or bite for 1d6 dmg. If both claw attacks hit, the Ghoul automatically bites doing 1d6 dmg.

Ghouls have infravision up to 60 feet. Because they live out their lives underground in vast tunnels and warrens, They have a 2 in 6 (1-2 on 1d6) chance of detecting traps, false walls, hidden construction, or noticing if passages are sloped. However, Ghouls must be actively searching for these abilities to function.

Ghouls are masters of hiding and camouflage. They have have the uncanny ability to disappear into the shadows when underground, in both natural and man-made structures, with a chance equal to 60% plus 5% per HD. They can also hide in shadows or behind other forms of cover in wilderness or urban settings at half the % above, round up.

Ghouls are slippery creatures who get a bonus of +1 to initiative rolls when alone or in a party composed only of Ghouls. 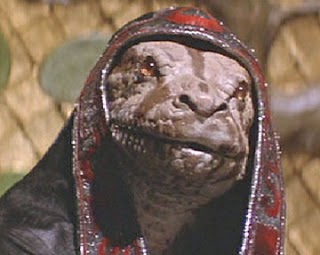 Serpentmen
Requirements: INT 9
Prime Requisite: STR and INT
Hit Dice: 1d6
Maximum Level: 10
Advance: As Elf
Attack: As Elf
Saves: As Elf
An ancient race, the Serpentmen are humanoid ophidians with scaled skin, fanged snake-like heads, and snake-like tails. They possess great magical abilities and many powerful Serpent men use spells to disguise themselves as a human.
The Serpentmen are remants of a mighty ancient empire which fell to darkness and death. The surviving Serpentmen dwell in enclaves hidden underground or in wild, remote places such as deep jungles, deserts, and swamps. They worship the great serpents Set and Yig. A few renegades worship even older and darker gods, but if discovered, they are killed or cast out from their kin.
A few of these renegades have corrupted entire enclaves which have fallen into barbarism and madness, worshipping foul dark gods brought to them by the outcasts.

A Serpentman must have at least 13 in both prime requisites in order to get the +5% to experience. They must also have an INT of 16 and a STR of 13 to get the +10% bonus.

Serpentmen can speak their language (Aklo), their alignment language, common, and Hyperborean (an ancient dead language.)

Serpentmen can wear any armor, and their tough scaly skin improves their natural AC by 1 (if the Serpentman is wearing armor, he uses the armor AC instead.) They can use any weapon.
Their fanged mouths can bite for 1d4 damage and, 3x per day, inject a dangerous poison, doing 2d6 damage with a Save allowed for ½ damage.

Serpentmen are masters of magic. They can cast spells as a magic-user and may wear armor while doing so.

Serpentmen also have infravision of 60 feet.

Posted by David Baymiller at 5:51 PM