Haunted Valley: Entities and Threats of the Valley 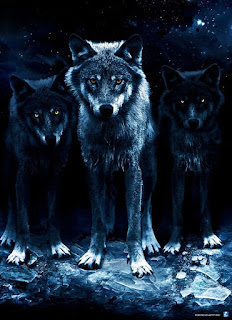 The Ogre
This nameless ogre was born the runt of his mother's litter in the interiour of the Pyrenees mountians. He was driven out by his brothers and has slowly made his way into the north surviving by hiding in deep forest groves, caves, and underground routes unknown to most men. He has taken up residence in the Valley of Wolves in the forgotten ruined temple. He has grown quite fond of man-flesh and his attacks are becoming more frequent, ultimately leading to a raid on an isolated cabin or farmhouse. His gluttony will be his doom as the residents of the Valley will have no choice but to find a way to end him once absolute proof of his existence is shown.

Stats as a standard Ogre.

The Rider and the Hounds
The Rider is a demonic spirit that rides the East Trade Road seeking the souls of the living. The Rider only appears at random intervals, often months apart. A shadowy figure radiating cold it rides a nightmare and is accompanied by a pack of three hellhounds. They chase down their prey, leaving their victim to be found the next morning torn and trampled and covered with hellish burns. The souls of those freshly killed by the RIder are dragged behind the nightmare on ghostly chains for the rest of the night and, as the spirit and his retinue fade in the light of dawn, are drawn down to Hell with them.
HD: 7
HP: 30
AC: 3/16
Damage: 1d8+1, sword
Special Abilities: level drain
Save: 11/F7
Move: 120/40
Alignment: Chaos

A black rider with fiery eyes beneath a ragged cloak and hood. The Rider is mounted on a large black charger with flaming mouth, eyes, and hooves. They are followed by three huge black hounds, drooling liquid fire. They are a terrifying sight. Those who witness their passing must make a Saving throw or flee in terror.

The Rider is semi-material, only taking damage from magical weapons and is immune to charm, hold, and sleep spells. When it has to engage in melee it attacks with a ghostly sword. A successful hit does 1d8+1 damage and drains two levels from the victim.

The hellhounds usually drag down the prey and begin to tear into the victim. The nightmare joins in, stomping and biting the the corpse. The soul of the victim rises from the mangled body and takes its place behind the nightmare, wrapped by spirit chains to the saddle and drug along silently screaming until the light of dawn takes them away.

If the Rider is destroyed the nightmare and hellhounds are dragged into a fiery crevice which opens beneath their feet and the victims it has claimed over the years are freed from Hell, unless their deeds in life have earned them a place in the pits.

The Hanged Ghost
Thieves, murderers, heretics. All have been hung by this ancient oak over the centuries. A rotted length of rope still dangles from a branch, swaying in the breeze. The souls of those executed are tied to this tree and at midnight of the new moon can be summoned with the proper ritual and the name of the one that is saught for questioning.

Six months ago a gypsy, a young man caught with the daughter of one of the local farmers, was hung. The young man's mother is a member of the gypsy band camped across the River and wants to lay her son's soul to rest and to seek revenge on the farmers who killed him. To do both the farmers must be identified and killed. The Captain of the gypsy camp has forbidden action to be taken, unwilling to risk the rest of the camp for revenge of a foolish boy, as he fears killing the farmers will curse his band. The mother is undeterred and is secretly seeking outsiders to help her in her revenge. She will offer them anything in her power and will lead them to the hanging tree to summon her son and find the names of his killers.

There is no stats for a Hanged Ghost. They cannot attack, only answer (1d4+2) questions before disappearing. If attacked they immediately fade away.

The Midnight Cat
Albraxius, a demonic cat summoned as a familiar for the witch Yolanda. Faithful to his mistress even unto her death. He seeks revenge on her killer, Captain Julian, but is unwilling to risk his own life. Having failed with several schemes, such as trying to kill the Captain in his sleep and charming one of the servant girls to poison his food, Albraxius has grown desperate. He watches and waits, searching for pawns he can manipulate into killing his foe. Once this is done he will seek ways to resurrect Yolanda.
HD: 2
HP: 8
AC: 4/15
Damage: 1d2/1d2 claws,  rake 1d2/1d2
Special Abilities: magic resistance, spells
Save: 14/F2
Move: 180/60
Alignment: Chaos

The demonic spirit Albraxius is bound in this form. He is a large (but not supernaturally so) jet black cat. If closely examined his luminous green eyes are without pupils. He can see perfectly in the dark.
Albraxius is capable of speech and can speak any language of man, demonic, and cats.

Albraxius fights with his front claws for 1d2 points of damage each and if both hit he automatically rakes with his back claws for an extra 1d2 points of damage each. He surprised foes on a 1-4 on a 1d6 (1-5 at night or in darkness.) He is only surprised on a 1 on a 1d6. He has a 99% chance of moving silently and an 85% chance of hiding in shadows. He is an excellent climber with his claws and can move at half normal movement without requiring a roll. He can make a standing jump of ten feet and leap up to twenty feet with a running start.

Due to his unearthly nature Albraxius has a flat magic resistance of twenty-five percent. This is rolled before any Saving throw vs magic is required. Success negates the magical effect or attack.  He can cast the following spells once per day and does not require the use of material components. However he cannot cast rituals: Charm Person, Dispel Magic, ESP, Mirror Image, Sleep.


Old Man Svalovich
Svalovich rose at midnight one night and clawed his way out of the shallow grave he was chucked into outside of the cemetery proper. He is a pale shadow of his former self having lost knowledge of all rituals and spells he once knew as well as most of the details of his former life. This includes knowledge of the valley, the lost tower, and his journal. He is cursed to wander the village at night, seeking the blood of the living. He has been seen peeking in windows and has climbed into a few bedrooms at night slowly draining the blood of the unwary. One of his victims has finally died and roams the forest at night.
HD: 4
HP: 20
AC: 6/13
Damage: 1d4 strike
Special Abilities: blood drain, weaknesses
Save: 14/F4
Move: 120/40
Alignment: Chaos

Svalovich appears more bloated than he did in life. His eyes are dull, his teeth rotted, and he as a ruddy complexion. Blood leaks from his mouth and other orifices. He is wrapped in a dirty burial shroud. He is a revenant (known as vampyr in his native land.) He casts no shadow or reflection.

Svalovich is a opportunist predator. He prefers stealth, creeping around after dark and climbing through windows to suck the blood of the ill and infirm. He has a 1-4 on a 1d6 chance of surprise. His bite does 1 hit point in damage per minute of feeding. Those drained to death by his bite will rise as a vampyr with 1d4 weeks. Fortunately usually he has enough awareness and self control to stop before a victim is drained to death.

If cornered he strikes with his fist for 1d4 damage. He has no weapon immunities but can regain one hit point for every point of blood he drains. His curse makes him vulnerable to holy items and water and he takes 1d6 damage from contact. Portals draped with garlic or warded by a holy item requires him to make a Saving throw to enter. He cannot cross running water and if immersed takes 1d6 damage per round. If reduced to 0 hit points he appears dead, a bloated bloody corpse. Unless a stake is driven through is heart, his head removed, or his body burnt he awakes at midnight with one hit point.

The Wolves
Due to the Curse the wolves of the Valley are unusually aggressive and intelligent, hunting in packs with unusually clever tactics. Even if game is plenty they will attack humans. Children are especially vulnerable to their depredations and the wolves are extremely clever when it comes to breaking into locked barns, hen houses, and even poorly maintained homes. The superstitious inhabitants of the Valley often blame devils or werewolves for their activities.

The Batswarm
An unusual number of bats swarm at night in the Valley. They are aggressive and will sometimes attack travelers in the forest, especially if there is no firelight to deter them. The swarm is of unusual size, covering a large area and making one attack  per round against each victim within its boundaries.

To simulate the effect of killing bats and whittling the size down in combat implement the following:
The batswarm starts out at five HD. For every six hit points of damage done to the swarm it drops by one HD. As the numbers drop the swarm does less damage to those caught within it, it's Saving Throws worsen, it hits less often, but its becomes harder to hit as the bats thin out. 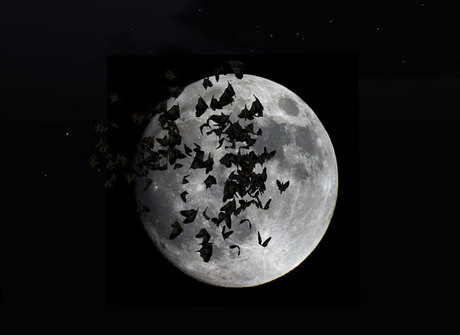 Posted by David Baymiller at 9:54 PM